Apart from the day trips to the coast we did start to stay for longer periods, but I don’t ever remember staying at a guest house or hotel in our younger years. I suppose the reason would have been expense. We did try camping one year and I believe that was at a site called Crows Nest and it was near Filey and Scarborough. I have checked and I think the site is still there. At the time, which must have been in the 1960s, I remember being very excited that we were going to go on holiday and that we would be camping. I have checked my photographs and found one with my mother sitting with a baby on the steps of a caravan, so what I think is that my parents and baby Stuart were in the caravan. My older brother, Andrew, and I would have been in the tent as I don’t ever remember staying in a caravan.

The car was packed and we set off from Leeds with great excitement and the usual routine of songs and games in the car. I believe my older brother managed his usual car sickness treat somewhere on the way, possibly York or near Tadcaster. I have been fortunate not to suffer the same affliction and of course when you drive it is never the same problem. I believe that the car was a Ford Anglia and I know it was the first car my father bought that was new. My younger brother even remembered the registration AUG277C. It was a greeny/blue with the rear sloping window. I seem to remember that the roof was a cream colour and it was bought from a dealership that was up Harehills Lane heading towards the Shaftesbury and York Road, but nearer St Wilfrid’s Church.

We thought it was a fantastic car, but looking back it was fairly sparse, with a small dashboard and mainly metal surrounds and I am not sure if it had seat belts. If it did, there certainly weren’t any in the back. The seats were a slippery vinyl and on a hot day would stick to your bare legs. Despite these limitations it was fantastic. It started first time, did not need a starting handle, it had a heater and I even think it had a radio, but I can’t be sure. Anyway, somehow we all piled into it and the boot must have had the tent and everything else. I believe additional storage was below our feet at the back of the front seats. I think we were only going for the weekend, but for us it was a real adventure.

We arrived in the evening and found our spot and settled in and explored whilst mum and dad unpacked the car and then we helped our dad set up the tent. At that time the site was really just an empty field, but there was a simple toilet block and I think you could go to the farmhouse to buy fresh milk. The tent we had was one Dad had borrowed and it was the old ex-army thick canvas type. There was no flysheet or built in ground sheet, but there was a tarpaulin to separate us from the rough grass. Finding the right spot without large bumps and lumps was difficult, but eventually it was sorted and tea and a quick meal was produced using a primus stove. It was very basic and it seemed to take for ages to conjure up beans on bread. We didn’t care. It was all so exciting. The weather wasn’t particularly good that Friday night and the temperature fell quickly and so eventually we were tucked up in our tent with a few blankets. I can’t say that it was comfortable night and it was quite cold. We woke at first light and Andrew and I climbed out of our tent and wandered over to the toilets. Breakfast was cornflakes and milk and as soon as possible we set off in the car into Scarborough. We returned later in the afternoon with fish and chips and we had arranged to go on a Mystery Tour. 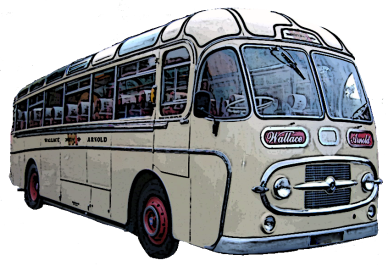 For the uninitiated, a mystery tour was a bus trip that you bought tickets for and had no idea where you were going, hence the mystery part.  Families and couples would fill the coach or bus and off you would head out of the town, passing the wonderful scenery, maybe stopping off at some point of interest or two and then arriving at a pub with a beer garden. The adults would have a few drinks and the children would have a lemonade and maybe a packet of Smith’s Crisps. There was only one flavour at that time and salt was provided in a little blue paper twisted bag. They tried to bring them back years later, but they were not the same as they didn’t have the twist and were just sealed bags. After a short stop we would all get back on the bus, the adults a little more chatty, and we would head back to the starting point. For some reason there was always a whip round for the driver and a collection would be made and someone would hand it to him before we all got off. The Mystery Tour became a regular part of our early holidays and it seemed to be more fun for our parents than us boys.

It was late when we got back to the site and we just piled back into the tent and had a more restful, if still uncomfortable night’s sleep. The following morning was much sunnier and probably to get us out of the way, Dad took us for a walk. Crows Nest camp was perched high on the cliffs and the field had a wire fence and there was a footpath running along the cliff edge. At places the path was very close to the edge and I was quite nervous. I was on the field side against the fence, then there was my brother, and Dad was along the side nearest to the drop. I noticed that the fence was quite insubstantial and there were just two wires and metal poles at regular intervals. We were enjoying our walk and the field next to us was filled with a herd of black and white cows. The sun was out, there were fluffy white cumulus clouds and the sea was a vivid blue and there were white tops to the waves. Birds were circling and I think they were crows and there were some gulls and it was one of those days where everything was perfect. There was the smell of salt, fresh grass and wild flowers and we were enjoying our stroll. That was until I took hold of the fence. I don’t know why I did it. It was there and maybe it was for security as we were close to the edge, but suddenly I felt a thump of power, a jolt through my hand and arm. I cried out and Andrew and Dad realised something wasn’t right and then what had happened. The fence was electrified to keep the cattle from wandering off the edge of the field. Apparently there were some signs warning of this, but I had taken no notice. I was shocked, but no harm was done. It was the first of a number of times I have managed to electrocute myself.

Dad decided we should head back and we were very careful not to touch the fence again. Mum was ready for us and we started to pack the car. When everything was ready we headed back into Scarborough and stopped off to buy a stick of rock each. The rock was bright red, mint flavoured and had the lettering of Scarborough all the way through it. They were wrapped in clear cellophane and there was a little black and white picture of a scene of Scarborough at the middle. They were wonderful and the trick was to suck them so that they lasted all the way home. We had no idea how they got the letters through them, but that was part of the mystery. I can taste them now as I am typing this. Mum and Dad didn’t have rock, they had a packet of mint humbugs. We weren’t allowed to eat them until we were heading back to Leeds and we spent the rest of the day cradling them whilst we went into a Penny Arcade. We were allowed so much money, two shillings seems about right, and we changed it into large penny coins. We then were in a world of lights, noise and pulling the handles of the machines that managed to take all of your money by the end, regardless of how much you won. It seemed that even then they had worked out how to ensure that no one left with any winnings, and we would just feed the machines until the pennies ran out and then look longingly at Mum and Dad, but rarely were we allowed any more.

Before we left Scarborough we went into a cafe to have a proper fish and chip meal, with tea and bread and butter. The knives were unusual, the silver teapots and extra water were all part of the magic and the golden fish batter and chips were delicious with a squeeze of exotic lemon. The chip butties with melting butter were to die for, and many probably did. But by golly were they delicious.

Tired, full, we were driven back home. The car was quieter on the way home, with only the sucking rock noises. Later we drifted off to sleep, and at journey’s end we were lifted out of the car and carried to our beds.

All 20 parts of my audiobook Blaze are now available, free of charge on the Slondcloud player below.