Some of my earliest memories are of going to my grandma’s house in Regent Terrace in Chapel Allerton. My brother and I seemed to go there regularly. My mother worked and so I suppose it was holiday childcare. We were not very old when we would catch a bus to go and visit. We knew where to get off and walk along Short Lane. Chapel Allerton was more of a real village at the time. Many of the current buildings were there and looked old but had a charm that newer estates and houses lacked. There were some very large houses that now have been divided into flats, but my Grandma’s was a tiny two up-two down terrace house, that has been gentrified in recent years. The toilet was in a row outside at the end of the lane and each house had its own and there was a large iron key we had to take to unlock the door. There was no electricity and so we would never venture down there after dark. There was the ‘guzunda’, chamber pot, for night time use if we ever stayed. They had moved out of the Working Men’s Institute at this point and I don’t know the reason, but Harry Wray was a Tailor at this time and worked in a factory making suits. He was a pipe smoker and the room at the front used to smell of his pipe tobacco and coal from the fire. The scullery was my grandma’s kingdom and Harry, grandad, rarely ventured in there apart to have his weekly soak in the tin bath that came out of the cellar. Water was heated on the black range and he would have sat in the middle of the room and then be followed by grandma, using the same water. I never saw this, of course, but I did suffer the ignominy of being bathed standing up in the sink, in front of a window for the world to see. Mind you, I was very young and as the terrace was a dead end there were never many walking past. My goodness, did my grandma take full heed of cleanliness being next to godliness as she scrubbed me and my older brother mercilessly. She would then proceed to dry us with a thoroughness that was only matched in pain by the sand filled towel on the beach after we spent a day there and the skin was sunburnt. She used to call drying our male parts as drying around the houses. Thank goodness this only happened when we were little. I assume my younger brother received the same treatment when he was old enough to go.

Grandma always cooked us enormous meals. I think she felt mum was starving us, or was it the thought that we might return home and tell mum we were starved whilst we were there? Anyway, it was usually Yorkshire pudding as a starter. She cooked it in a large tray and the fat was at incendiary heat when the batter was added amidst a pyrotechnic display of flying batter and fat. They were delicious, crispy, soft and not at all flabby, even when soaked in tasty rich gravy. I must say that I have never tasted better and my mother did try, but she knew she could not compete. My older brother had Golden Syrup, Tate and Lyle, on his, but I much preferred gravy. We then had a roast dinner with more Yorkshire pudding, roasted potatoes and peas we had shelled in the morning. You don’t seem to get that now. I think children think peas just come out of plastic bags ready frozen. There was something in the ritual of shelling peas. You felt you had a hand in making them. 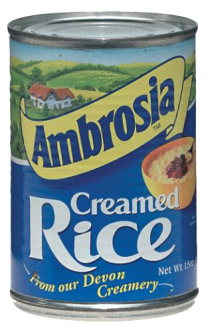 What was more, you could pop a few of them into your mouth raw and they were sweet and had a distinct flavour. They went into a colander and then were rinsed. We devoured the meal as only growing children can and I think it must have been the combination of having brothers and school dinners that made me eat so quickly in case there were seconds. I still have the habit of eating very quickly. Now you would think that was the end of the meal, but no. Grandma always did a pudding. It was usually tinned rice pudding. Ambrosia was the best and to round it off Andrew, older brother, would have an enormous dollop of jam. I preferred my au naturale, but there was always enough as she did two tins.

At the end of this we were pogged and unable to move very much, so we went into the parlour. Grandad was not often there, but if he was he would be fiddling with his pipe and reading the paper and not giving us much attention. Grandma would get out her card table with a green baize top and a pack of Waddingtons playing cards. Leeds and Waddingtons was the home of playing cards. Grandma’s came from used packs from her whist club at the Workman’s Institute. I always liked the feel of cards and the look and design were somewhat mysterious. She taught me and my brothers a number of card games. The first and most obvious was Snap, but if grandad was in that would be too noisy. She taught us Patience and we’d watch her hands dart around the table moving cards and piles about. There was also Pick Up where all cards were face down and you had to turn two over and if they matched you removed them. This was a test of memory and if you got a pair you had a second go. If you were good you could pick up a few pairs in a row. There were two other games, Pump the Well Dry where you placed a card down and if it was a picture card the next player had to place one card for Jack, two for a Queen, three for a King and four for an Ace. The next player added the number of cards in turn and if they didn’t have a picture card, you took the pile of cards. If they had a picture then the following player had to add the appropriate number. The purpose was to collect all the cards in the pack. The game could go on forever.

The other game was Beggar My Neighbour and this was a gambling game. We would have three pennies each and we were dealt three cards each and there was an extra hand of three, face down on the table. The idea was to get either pairs, three of a kind or a flush. The first person could swap a card with one from the middle, or could swap their hand with the one in the middle. The cards then were face up and the next player had to either swap a card or stick. If they stuck then everyone else had one go unless they passed. Everyone then had to show their hands and the best hand took the pennies from the centre that each player had placed there. The game continued with new hands until someone had won all the pennies. Now with young children it could get a little fiery as we were, and still are, quite competitive. I remember getting quite angry with my grandmother as she would let my younger brother, Stuart, win and I didn’t think that was fair. Grandma always made sure that none of us missed out and made sure we went home happy. These were indeed happy, but simple times. 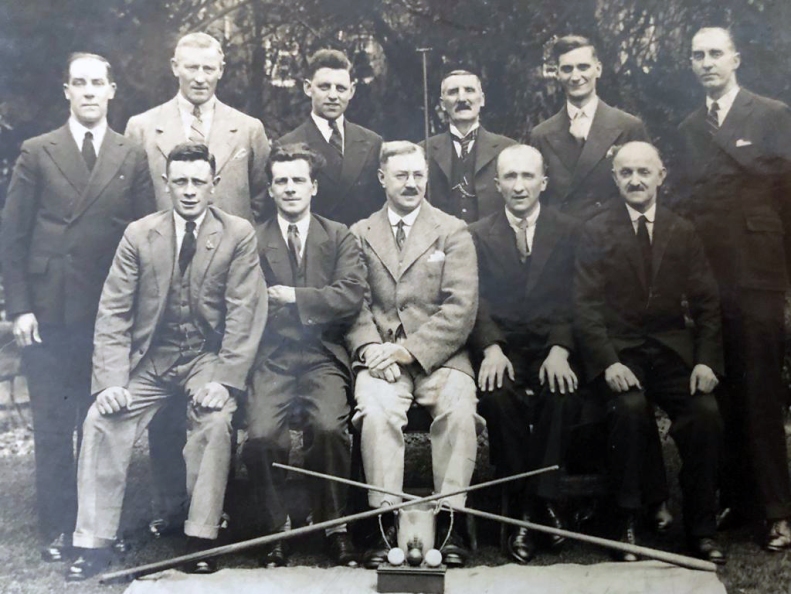 I have spoken about my family links to Chapel Allerton before, but I have discovered a little more since I last mentioned it. The family ran the British Workman’s Institute which was the Snooker Hall and Whist Club at the time. My grandfather’s family name was Wray and I know he was a keen snooker player as well as a regular at the Nags Head Pub. My mother and aunt were born in the club as my grandparents managed it at the time. 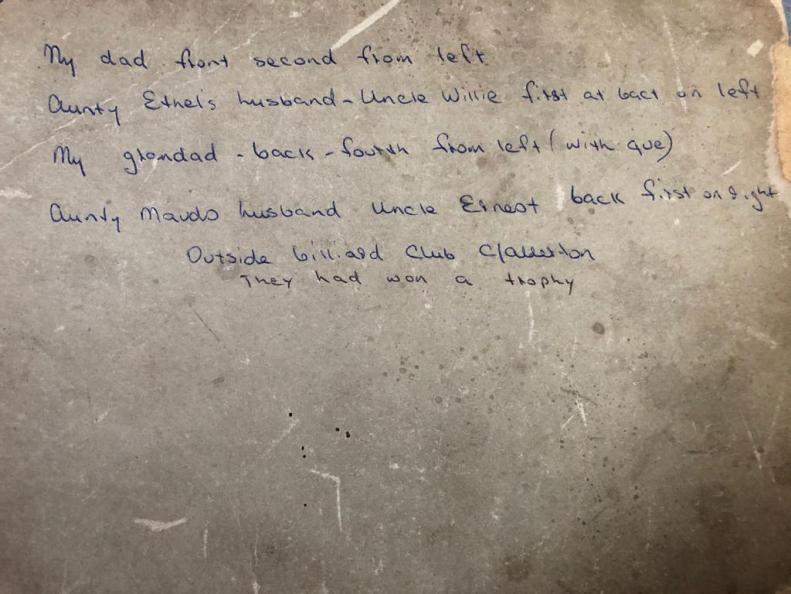 My grandad was an elderly man when I remember him, but my younger brother came across the photograph above and my mother had written some notes for us on the back.

My grandad is clearly recognisable as a young man, second from the left on the front row, but I never knew my great grandad who is third from the right on the back row with a splendid moustache. My mother’s notes also name family members, which might be of interest to others in Chapel Allerton. I know there are still Wrays about. The club was demolished many years ago, but I still have some memory of visiting and remember it being damp with a flagstone floor. My older brother tells me that my grandad’s name was on the honour board, Harry Wray. 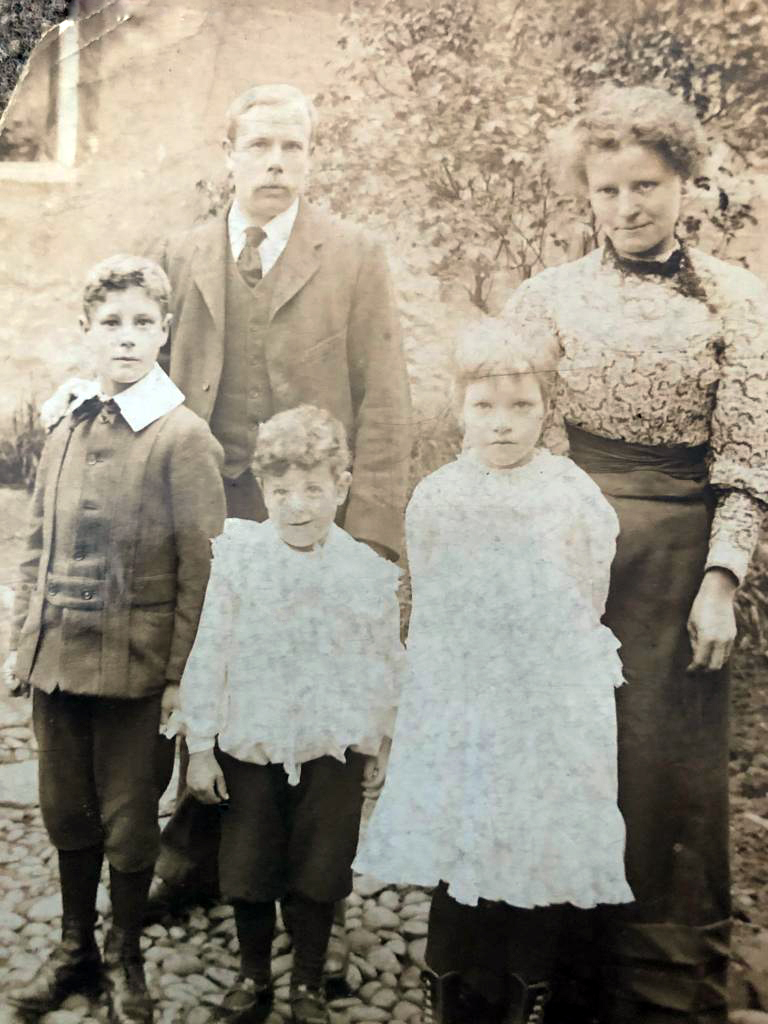 There was also a photograph of my grandmother’s family. They lived in Leicester in service and the family name was Kinton. There is a younger brother wearing a matching top to my grandma and an older brother, but I don’t know their names. This little girl has the look of my grandma, but I can only think of her as a loving little, fat lady, with chubby arms and thinning hair. I don’t think life had always been easy, but she was the sort to make the best of whatever came her way. There is something poignant about a photograph. That moment caught in time. The faces stare at you as if they will start speaking at any moment, to share their secrets.

Parts 1 to 18 of my latest fantasy audiobook are available to listen to, at no charge, on the soundcloud player below. There are two more parts to go.

5 Replies to “‘Cup of Tea Tales’ – Real Yorkshire Pudding and Card Games with my Grandma in 6 Regent Terrace, Chapel Allerton. Leeds in the 1950s, and a bit more Family History.”