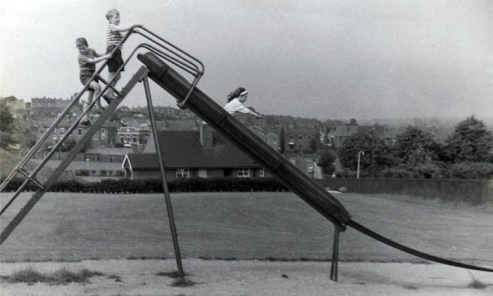 One of the major changes from the childhood I experienced and that my grandchildren have is that of playgrounds. Modern playgrounds are colourful, well built, architecturally designed and above all safe, whereas ours were sparse, dull coloured, barren areas, but more than anything were exciting and dangerous.

Who can forget the slides that towered over the parks? Bare metal, steep angled and the climb up the metal rungs was enough to raise the heart rate and provide a wide view as we towered above the surrounding area. The views alone were worth the danger. They did offer two alternatives for children: the lower slides that were intended for younger children, but these were still higher than many modern slides, and the big slide and these were, or at least appeared to be in my memory, towering structures. With a nod to safety the tops were sometimes caged in and a small platform was where you awaited your turn to shoot down the highly polished steel slide at breakneck speeds. The edges of the slide were low and offered little room for error and the base was often a mixture of tarmac, concrete, mud and gravel. The angle of incline was very steep and with an addition shove, or swing off the cage, extra momentum propelled you at death defying speeds, or so it seemed. When reaching the bottom the slide levelled off and the thin metal allowed legs to dangle over the sides to brake the impetus and enable a safe stop. That, at least, was the intent, but as we became older the sensible use was not exciting enough and variations were created to increase the risk, the danger and thus the pleasure. Head first was an obvious adaptation and on a good slide it could result in flying off the end and getting a faceful of gravel and grazes, cut knees and other scars that were worn as a badge of valour. Only the youngest children were supervised and as we got older our parents probably felt that what they didn’t see us do was better for their nerves.

My knees still bear witness to minor accidents, but somehow we all seemed to survive fairly intact. I now wonder if the casualty departments at St James’ Hospital or the Infirmary may have told a different tale.

Each slide had its own personality and characteristics. Some were slower, some steeper, some wider and my favourite, I think, was at Potternewton Park. I may be wrong there, but the one I am picturing was a partially green painted structure that allowed almost supersonic speed for what seemed to last for a long time. I would be interested to hear others’ opinions on the best slides.

If you survived, or tired of the slides, there were other challenges. The roundabouts were fantastic fun. If there were families using them with little children then they were sedate frames that consisted of a wooden base, circular on a metal frame and the circle was divided by four metal rails that allowed you to hold on whilst the whole structure revolved around a central column of steel. The base was about five or six inches above the playground surface. Young children would hang onto the hand rails and parents would slowly push the roundabout making sure the child was secure and safe. Slightly older children would jump on and off in the manner that the designers probably intended.

When the roundabout was free of youngsters and adults then we made full use in an entirely different manner. Speed was the essence. You would hold on the the rail and run, pushing the roundabout as fast as you could, and we really could get up a speed. At maximum velocity and just before you were dragged off your feet you jumped onto the revolving platform and hung on for dear life. The centrifugal force was trying to throw you off, but you clung on, feeling the wind on your face and through your hair, laughing and challenging the world to do its worst as you were up to it. Such is the esprit of youth. To make it more interesting you would hang backwards and the challenge was to get as low to the ground as possible. The real art was to have the back of your head just above the ground and you hoped there weren’t any lumps as your hair brushed the gravel. Eventually, exhaustion, friction and nausea would put an end to the ride. Who can forget the dizziness of the spinning world and the inability to maintain your stance? We would stagger around like drunkards until our heads cleared, but it was living.

Accidents did happen, but not often and I never saw any major ones. I did see children lose their footing as they ran pushing the roundabout as fast as possible and get dragged along before letting go. The injuries tended to be very nasty, deep grazes that hurt and took a long time to heal. The scabs on your legs would pull as they became hard and started to weep. Even worse was when they began to itch as they healed and finally dropped off or were scratched off. Germolene seemed to heal everything and I can still smell its distinct aroma.

The other challenge of the roundabout was the ability to jump on and off whilst it was going. To impress everyone else around, this meant choosing maximum speed as the opportunity to demonstrate one’s skill. Timing had to be just right and you had to hit the ground running or catastrophe would occur. Planting yourself face first onto a round surface would be bad enough and extremely painful, but much more painful was making a fool of yourself in front of others and losing face, sometimes quite literally. Many a time I witnessed such falls from grace as a cool (don’t think we used the term ‘cool’ then) youth lost all credibility with a disastrous dismount. The most dangerous and highest status trick was to jump onto a speedily revolving roundabout, avoiding the bar and landing and staying on your feet. Only the foolhardy would attempt this and I suppose that Darwin would say it was survival of the fittest as many came a cropper.

There was no limit to our creativity when riding the roundabouts. You could hang upside down on the bars whilst riding, lie upon the top of the bar, sit on the central hub, or the base, the variations were endless. You could sit and read the Beano or Topper, but that tended to make you quite sick after a while.

The playgrounds may have lacked creative designs, but a child’s imagination could make them wonderlands. There was other equipment and the wooden see-saw was a must. Young children would be carefully held on by adoring parents but as we got older we wanted fun and that meant bouncing up and down with real force. I can still feel the shock of the wood hitting the concrete and the shuddering shock passing up your spine as you pushed up as hard as you could to inflict a similar punishment on the spine of the child opposite. If you were on your own you could stand on the top and, legs on either side of the pivot, move the plank up and down. Again we developed the knack of jumping off the see-saw whilst it was in motion. The danger here was you had to get clear otherwise the plank of solid timber could strike you. I remember being struck under the chin and it must have been similar to a good uppercut from a heavyweight boxer. 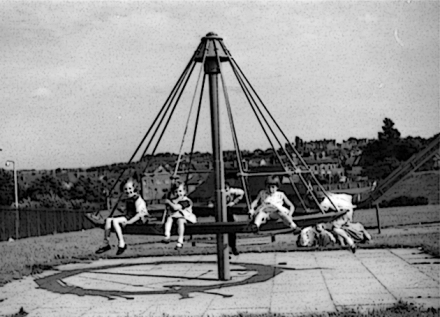 Another piece of equipment that was disappearing even then, was something I have been informed was called a Witch’s Hat. There was a tall central pole of solid steel that was probably three or four yards standing above the ground and supported on it was a cone shape metal frame that was pivoted at the top. Much like the roundabout it could be pushed to revolve, but it had the added bonus of also moving up and down as it was balanced. The frame was about two or three feet off ground level to allow for the up and down movement and it really was for older children as the youngsters couldn’t climb on by themselves. All the dangers of the roundabout and other equipment seemed to be collected onto the one set of apparatus as it spun and dipped and rose. I guess it must have had problems as they were being removed over time.

Of course, the compulsory swings were in every playground. There were the milk-crate designed ones for little children where they sat in a wooden frame and the legs had to be slipped in so they were secure. As you got a bit bigger the problem was getting out and it required adult help to pull you out whilst the frame dangled off your legs. The swings for the oldies were basically a wooden board held by chains. There was a real joy in swinging when little as your parents pushed you and would sing songs like ‘See-Saw Margery Daw’, but swinging solo when older required technique to get going. You pivoted your body to build up momentum and height. Teenage years saw us become immortal, or so we thought, and danger added to the developing emotions. Rising above the ordinary, both literally and figuratively, was important and the swing offered both. The one who could reach the highest had more kudos than the others. I have seen people reach almost the vertical, where gravity overcomes centrifugal force (I know science has replaced centrifugal force, but that was what we believed at the time)  and the swinger fell vertically down and the fall was broken by the chains and there was a sharp bounce. Nevertheless there was a great joy in swinging high and staring down onto a world with a totally different perspective. There was an intense feeling of being alive and the teenage years saw the extremes of emotions: euphoria and misery went up and down like the see-saw and swings of the playground. We didn’t care that the equipment was dangerous and misused. Life was like that. We could experience danger and either learn to manage it or suffer the consequences. Today we have taken much of that experience away.  The modern child no longer faces any dangers and therefore does not develop the skills to know their limitations and the potential consequences, until they are seventeen and we allow them to take control of a car. Is it any wonder they have so many accidents? Maybe our dangerous playgrounds made us safer in the long run. All I really know is that we had such great times!

Parts 1 to 16 of my fantasy audiobook, Blaze. You can listen free of charge on the Soundcloud player below. Each part is approximately thirty minutes.