Time seemed to pass really slowly in my early teens, but now it disappears in a flash. I think I am still waiting for that day when I will become grown up and I know some would say that is because I am a man and they never do. What I do remember about my early teens was the intensity. Life was a matter of extreme ups and downs, with very little in between. Two things seemed to dominate my life and unfortunately, studying and my education at Roundhay School weren’t either of them. The band and girls dominated my life. One was out of my control and was due to raging hormones and the other was something that I just loved. Music was enjoying its halcyon days. It had passed beyond simple songs and real musicians were becoming gods. It was the age of the rock guitar and musical virtuosity and I wanted to be part of it.

Now a number of things were standing in my way. One was lack of equipment and the second was the ability to play. Others may have been daunted by such obstacles, but not me. I was always a realist and whereas I could play a few chords, I wasn’t as good as Pete and therefore I chose to play bass. I started on the acoustic guitar, but clearly we were going to have to move on. Pete, being a couple of years older had jobs as well as studying and so he had access to more money than I did. I can’t remember the exact time, but at some point he became the owner of a red semi-acoustic electric guitar (I think this was his first one) and amp and speaker system. This became established in his cellar and we were in business. I say we, but I was still to have an instrument. Another of Pete’s friends, John, was also part of our group, but he didn’t have an instrument apart from playing piano if one was around, so it was clear we would have to invest if we were to progress. I think I heard of someone selling a bass guitar for about five pounds and I managed to get the money somehow and I became the owner of a fairly basic and battered bass. I loved it. It was heavy, the strings were thick and the tuning machine heads enormous. Oh what joy! I was almost set up. Now the origins of John’s electric piano purchase is shrouded in mystery. My memory tells me that I heard from someone at Roundhay that it was for sale in a electrical music shop at the top of one of the arcades in Leeds. I can’t remember the name of the shop, but it sold amps and speakers that were manufactured in Leeds, I believe. Anyway, I remember passing the rumour over to Pete, who let John know and he went in and bought it for a stunning six pounds. I remember, clearly, arriving to view the wonderful keyboard. Now, John has a completely different memory of how he came to buy the electric piano but, regardless, he did invest in it and we were beginning to assemble the basic gear that a band needed. John’s electric piano was not quite in tune and he opened it up to discover that it worked more like a harpsichord. Short metal plates of varying length and thickness were mechanically plucked when the key was depressed. John realised that tuning could be achieved by undoing the locking nut and minutely adjusting the length of the metal plate. He was always very thorough and the next time I saw him and his electric piano, it was now in tune. 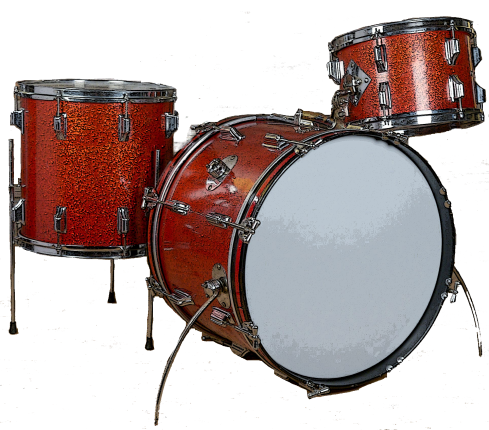 John and I both eventually equipped ourselves with amps and speakers, all second hand and of limited quality, but they were ours and they could produce very loud volumes of sound. I became really interested in the playing of the bass and started going to the music shop in the centre of Leeds that sold wonderfully expensive instruments, sheet music, strings, plectrums and ‘How  to’ books. Who could forget Bert Weedon’s – Play In a Day books? Would that it were true! The shop was a magical emporium with bright, shiny, chrome and coloured instruments that called to me like the sirens but, alas, without the necessary money they were always going to be beyond my reach. Rather than be disappointed by my equipment, I took pride in its battered appearance. If you could play good music with this equipment, then you really could play. If only!

In Pete’s cellar we set to. As we really didn’t have any idea how to play other people’s songs, we started writing our own material. New material such as Going and Last Bus became the backbone of our growing set and what we lacked in musical prowess we made up for with arrogance, attitude and somewhere a kernel of originality. One thing was missing and that was a drummer. Another friend of Pete’s, Brian, appeared one day with a new drum kit that he had managed to get on hire purchase. The kit looked the business and so did Brian. There was just one problem. Brian seemed totally devoid of any sense of timing or rhythm, which was a bit of a downer for any rhythm section, but not for us.

The talent we were short of, we compensated for with style, or at least that’s what we thought. Pete’s dad worked for Leeds transport with the buses and his mum ran an old people’s home in their house. I often wondered what the old folk thought of us belting out rock from the cellar beneath their lounge. Pete’s dad contributed to our style with a couple of khaki bus jackets that were modified, and Pete’s mother, I believe, added triangular patches into his Levis to make them even more bell-bottomed than before. His original ones were smallish triangles, but they became bigger over time. Long hair (I think Pete might have had a moustache at the time) and we were ready to take on the world. Now we had a music set of about fifteen minutes and with growing confidence, if that was possible, we decided to take our place on the world stage. Where else would a budding group of superstars start, if not in a talent competition, and not just any talent competition but the one held at the Leeds Transport Club?

I have just listened to a documentary on the Beatles, and Paul McCartney said that they had entered talent quests and that they had never won any, so I don’t feel in bad company. The night came. My dad and others helped transport the gear and we turned up ready for the big time. The club was the typical working men’s club and the talent show was in between rounds of Bingo and rounds of drinks. It was quite a large club and it had that smell of stale beer soaked carpet and old tobacco. The club was filling and the MC gave us a few minutes to set up and I think we were on fourth of fifth out of six. The MC spoke to Peter whilst John and I were setting our gear up and apparently he had asked the name of the band. This was a bit of a shock as we hadn’t thought of one, but Peter told him we were the Gurus. The night started, we had a pint. I think I was probably fourteen at the time. The turns were the usual, a comedian, an organist, a male cabaret singer, us and a little girl singer. Our turn came and the MC got on the mike.

“Now ladies and gentlemen, a new band of young lads! Fair crack of the whip for the Guruts!”

This was said with all the confidence and aplomb of a seasoned MC, in a broad Yorkshire accent and clearly with no understanding of what we were called or its implication. Very taken aback, we took to the stage. John was on vocals and we did three songs, Atlantis, Going and Last Bus, I think. I am sure Peter or John will put me right on this. The audience had that shell-shocked look of stunned mullets and at the end there was a courteous ripple of applause and they quickly ordered another round of drinks to steady their nerves. I think the little girl came next and clearly she was the darling of the ageing clientele and following us she couldn’t have failed. She restored their faith in human nature and they rewarded her with winning the event and the prize.

We were not easily defeated. Of course the audience wouldn’t like us, they were old, over twenty-five at least. What did they know about music or talent? We packed up, a little wiser, determined to carry on, but knowing that this was not our kind of venue. One thing was sure. We could only move on up from here!

The Galahs turn up in my garden in Perth.