I suppose that the real awakening of adolescence was the realisation that you could find others attractive and that others could find you so. Up to this point in my life I don’t ever really remember it entering my consciousness. You could be successful in certain activities, sport or otherwise, and that was a nice feeling and of course your relatives loved you. If you were lucky, that was a given. 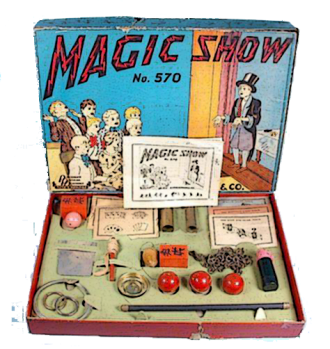 I do remember Harehills C.P. School having some sort of talent competition when I was in my last year and I put myself forward to do some magic tricks. I had been bought a box of tricks from a toy shop on the way back from Hornsea and I think the shop was in the town of Beverley. There were a few simple tricks, a magic wand and I practised at home. The problem with performing to a large audience was that it needed to be visible and most tricks are one on one. Anyway, I made coins disappear into a glass of water, sable to predict the card that someone picked and other simple tricks. At the performance we had dancers, singers, possibly Paul and Barry Ryan, people playing instruments and my tricks. It went better than I expected and it probably set me up for a life in entertainment, hence a career in teaching. There was something good in being the centre of attention and as a teenager I reckoned it was better to be noticed and disliked that just be ignored.

My arrival at St. Edmunds’ Youth Club was the real start of attempting to get myself noticed. Youth clubs in these times were fairly basic. There would be a record deck with current hits belting out, table tennis, some dancing, but mainly girls around their bags, and a lot of preening, strutting and nervous introductions. Some people appeared to be naturally cool and they were the ones we all aspired to emulate. The cool kids just had that something, and whatever it was, we all wanted it, or even just a little bit. As I have mentioned before, I can’t see what girls found attractive in teenage boys, but I was certainly interested in this beautiful alien species of girls. Apparently girls from Roundhay School had perused the boys, maybe from a distance through the bushes, or at Oakwood or at the shops outside the girls’ school entrance, but I can’t say that I knew many, apart from the one or two who I knew from primary school. The other disadvantage I had was being from a family of boys. Two brothers were not a great help in understanding, nor conversing, with girls and so I was one of those who stood embarrassed. This being said, I wasn’t really a shrinking violet either. I wanted to be cool and that meant acting and looking the part. In these times my wardrobe, and most other boys’ wardrobes, was fairly bare. We had school uniform and I had managed to persuade my mother that I needed a pair of jeans. There were only two brands that most of us would be seen in and they were Levis, the number one choice and then Wranglers. Not quite Levis, but a bit cheaper and still fashionable. I think my first pair of Levis cost about five pounds and that was a not insubstantial amount of money. Other gear was often ex-army and navy trench coats, denim shirt or t-shirts. I was fortunate that I could nick my older brother’s gear if he was out and that helped to make me look less nerdy.

My school friends at the time were Chris Mills, Stuart Spinx, Roger Harvey and Anthony Indyk and we were gaining a reputation that was not altogether wholesome. We became regulars at St. Edmunds and then started branching out. Lidgett Lane Methodist was the nearest and it became our home base. I remember there were two male leaders and they were fantastic to put up with all they did. Cedric Robinson was one and I remember him as he had the most un-cool name I knew, Cedric! For some reason Lidgett had a wider circle of members and there was the old hall building and the new hall and one or two other rooms and a kitchen. Both Lidgett and St Edmunds became venues for our teenage rock band, where we could practice and perform over the next few years.

I suppose the church youth club was to provide a safe environment for teenagers to meet, and to potentially recruit youngsters into the specific faith. I feel very fortunate that they existed as there doesn’t seem to be the same options for youngsters nowadays, apart from hanging in shopping malls and the streets. These youth clubs would arrange occasional dances, activities and excursions, and I am very grateful for the leaders who put up with me and my friends, and tolerated our chaotic years. I never saw the leaders lose their patience and they had a lot to contend with. Sometimes rival groups would send a posse looking for trouble and yet, on the whole, serious conflict was avoided.

So I was kitted out the best I could be and there was a ‘do’ at a church club off the Ring Road at Moortown Corner. I had borrowed one of my late grandfather’s pipes and had a pouch of tobacco. I had loved the smell of his pipe and thought it might add something to my maturity and charm. I had never smoked one, but how hard could it be? I had also come up with a theory. Girls would find me far more appealing, mysterious and attractive if I sat by myself looking morose, puffing on a pipe. As you can imagine, with this recipe for success, how could I fail to win fair lady? I can’t remember the date exactly, but I Can’t Help Myself was played endlessly, so after April 1965. The Four Tops may not have been able to help themselves, but clearly the girls at the club managed to and by the end of the night two things happened. One, I was feeling dreadfully sick and vowed never to smoke a pipe again and two, I left without a female companion.

You are probably thinking ‘Silly Fool’, and you would be right, but did I learn? No! I tried this same foolproof method to attract girls for a surprisingly long time, before I gave up this approach. It never worked, but I know that I wasn’t alone believing that this approach would be successful. I knew others that used it for years, with a similar rate of success.

So what next did I try, I bet you are wondering, and was it more successful? Well, I guess the answer was, yes it was more successful, but then it could hardly have been less so. Music and pop stardom, well a little notoriety. It had worked for the Stones, the Beatles, the Pretty Things, why shouldn’t it work for me?

It was a chance encounter that changed everything for me. One evening at Lidgett Methodist Youth Club a group of older lads arrived. There was one clear leader of the pack and he had a long black coat and long black floppy hair (and still does). He was tall, lean and had a presence that was undeniably attractive. Now he was cool! Somehow I got talking with his group and wandered down afterwards to the edge of the Soldiers’ Field and sat and stood around a wooden bench. For some reason we hit it off. They were not from Roundhay, but were Allerton Grange lads. We talked music and we seemed to have similar tastes. Within his group was another lad, Roger, and our lives have been mysteriously linked over the years to the point that we now live two hundred yards away from each other in Perth Western Australia. The rest I had no great affinity for and one tried to start a fight with me which Pete, put a quick stop to. We met up the following week at either St Edmunds’ or the Methodist’s as we called Lidgett Lane, and we got to know each other quite well. Pete lived in a large terraced house at Harehills, off Harehills Lane, near Potternewton Park and he had an old cellar with its own entrance to the yard. I was invited round and we used to sit and listen to his record collection. Pete also had an acoustic guitar. Stuart Spinx and I were there and Pete played a song that was a current hit. Neanderthal Man, by Hot Legs, later to become half of 10CC. The year was 1970. It really was one chord, a rhythm and a chant. Needless to say he could play it and we sang it. We must have thought there was something in it as it was suggested, probably by Pete, that we form a band. I was all for it. The complication of not having an instrument and not being able to play one, was not going to hold me back. It was a chance encounter and a decision that has had a profound impact on my life, Pete’s and later another friend, John’s, lives.

For those who like a bit of rock with a Western theme.