It seems strange nowadays, but when I was born in the 1950s, most families did not own cars. Transport was public and it meant utilising trains, trams, buses and coaches to get anywhere. One of the results of this was that travelling to and from places had to be planned and it was a much more time consuming endeavour. The idea of just dropping by to visit a friend or relative on a whim was almost unheard of.

In early memories I have covered the original car that the family owned and I believe it was one of the first in the street, if not the first. Even if your family owned a car their reliability was not what it is today. The old Austin A7 Ruby, known as the ‘Fridge’ as it had no heating and was started with a crank handle, meant any trip in it was a real challenge as it was prone to breaking down. I do remember one outing to the North Yorkshire Moors, Fylingdales just south of Whitby. It was where there was an RAF base that had the Early Warning System for a nuclear attack. The detectors were in structures that looked like giant white golf balls. You could see them from the little road that cut through the moors, but you were well away from it as there was a fence and warning signs of terrible things that might happen to you if you entered. Apparently, it would provide a four minute warning, which was probably sufficient time for Britain to send its missiles off to devastate the USSR as it was then. We had arranged to go on the trip with my aunty and uncle. They went in their car and we followed along in ours. Their car must have been newer and more reliable. All was going well until we hit the steep hills getting up to the moor. The ‘Fridge’ failed to live up to its name and started to overheat. We all pulled over to the side of the road and had a picnic whilst Dad and Uncle Ernest checked the car. I don’t think that there was much that could be done, except allow it to cool and then carry on. Anyway, we managed to see the day out, but its unreliability led to it being replaced with the Ford Prefect. This was a larger car, shiny, with running boards and certainly more reliable. Of course, seat belts did not exist in these times and the dashboards were hard metal and would have provided little protection if there were an accident. Starting was always a challenge and the choke would be pulled out, there would be a tense wait as the engine would turn once, twice and hopefully start on the third turn.

The Prefect allowed us to venture out into the Yorkshire countryside on day trips and it would have been at this time that tourism began and scenic parts of the country started to attract sightseers. Before this it would have been coach trips, but these would have mostly been to seaside towns or larger centres. Cars allowed working folk to go to new and exciting places, that trains and buses didn’t venture to. Fountains Abbey near Ripon, Brimham Rocks near Harrogate, Plumpton Rocks, Knaresborough, Harrogate, Otley Chevin, The Cow and Calf at Ilkley and the most magnificent, Malham Cove, all became available and the beauty of the Yorkshire countryside could be enjoyed and appreciated.

I must admit that there was the added excitement and tension about the early trips. The Prefect was only slightly more reliable than the ‘Fridge’ and so there was that added spice of not knowing whether you would get to your destination, or whether you would get home without the car breaking down. Add to this the noise and chaos of at first two boys and later three carrying on and falling out in the back seats, one of whom suffered travel sickness. My father would never stop, whether it was to let my brother out, ask for directions, or to give our legs a stretch. My mother would be the map reader, and the pilot and navigator were never in agreement. Oh, the joys of it all! We did sing a lot. Sometimes it would be endless green bottles or we might play games like I Spy, as there were no car radios in these times and certainly no IPads. 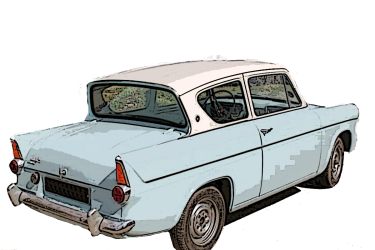 One trip has stuck with me all my life and it illustrates my parents’ relationship and the etiquette of the time. We went to Brimham Rocks and if you have never been, you have never lived, as my father was wont to say. It is a fabulous place and, as boys, we were in heaven. Sculptured and weathered boulders covered the area in an alien landscape of endless possibilities. Climbing, hiding, finding caves and holes as well as the ubiquitous picnic with thermos flask of tea, egg sandwiches and biscuits. The journey was a longer one as the roads were narrow and the Ford Prefect was not built for great speed. Sabot (the Wonder Dog as someone called him) was in the back with us and we arrived incident free. There were quite a lot of other people there as the weather was good and it was quite a hot day. Dad pulled off the road amongst the rocks and stopped in a little grassy bit. We piled out the back excited, when there was a cry from my mother in the front. In the hurry of getting everything packed and ready, she had forgotten to change from her slippers. My dad’s response was ‘Oh, Peggy! Well, you can’t get out like that!” Nowadays I am sure we wouldn’t bat an eyelid and would have either gone barefoot or wearing fluffy slippers, but in these times it would have been a major embarrassment. The result was a real dampener on the trip. Mum stayed in the car. She did open the door and held Sabot on the lead. The rest of us sat on the tartan picnic blanket and had the picnic as usual, but there was a definite mood and silence as my mother had let my father down. Needless to say, we didn’t stay all that long and, as you can guess, it never happened again.

One of our more regular journeys was to Ilkley. Now there were two reasons for this. The first was that Ilkley Moors are fantastic and the Cow and Calf well worth a visit, and the second was that we had relatives there. My grandfather on the Scottish side and my Aunty Chris lived there. Chris had two children and they owned a shop on the main street. I think it was called Scots’ House and it sold Scottish clothing. The two cousins were older than my brothers and me and there was a boy and a girl. The house was multi-storeyed above the shop and was very big. My male cousin had an enormous Scalextric in the attic and an air-rifle range in the cellar. This was almost unheard of for anyone I knew, so we loved to go and play there.

My grandfather was from Oban, Scotland and he was originally a gamekeeper. There was my Aunty Chris, my dad and another uncle called Jim. Jim was an academic at St Andrew’s University. My father had been in the submarines during the Second World War, on HMS Scotsman as Chief Petty Officer and he was an engineer. He moved to Leeds after the war to work at Catton’s Steel Foundry on Black Bull Street. For some reason which I have never discovered, my grandfather left my grandmother behind in Scotland and came to live with his daughter, my Aunty Chris, in Ilkley. He was a bit serious as a grandfather and not at all like Harry and Mary Wray in Chapel Allerton, who were so open and loving. He did come and stay with us in Gipton Wood Crescent for a week and we would go on walks to the Soldiers’ Field at Oakwood. I remember well, large flocks of sea gulls that were feeding and they would take flight at our approach or the intrusion of over-eager dogs. On these walks I was amazed at how he could find coins on the ground as we walked. My grandfather seemed to be constantly looking down and picking up pennies, threepences or sixpences and he would present us with them. I was staggered at how clever he was and how careless people must be. It was only as an adult that I realised what he was doing. It was his way of giving us some pocket money without it being overt.

The car trips to Ilkley became something that my dad and us would do without mum. There was some sort of family falling out that I didn’t and don’t know the cause of, so mum didn’t come along on the visits. I remember the final straw as we broke down once again just before we got to Otley. It was shortly after this that we got our first new car. I think it was bought from Brown and Whites and it was a Ford Anglia, the one with the inward sloping rear window. It was an almost greeny, duck-egg blue and my younger brother recently let me know the registration number, AUG277C, which was quite easy to learn. To say it was a major improvement would have been an understatement. It started first time, it was reliable and it wasn’t black, which was quite a change. Henry Ford said that you could have any colour as long as it was black, but things changed in the 1960s. That car and the ones that followed took us all over Yorkshire and then up to Scotland once to see my dad’s home near Oban and we even managed Bournmouth and Torquay, where you could go in the sea for more than a few seconds without your feet turning blue. The arrival of cars provided the masses with opportunities that they could never have dreamt of, much as package holidays and cheap flights did for the following generation. We didn’t realise how lucky we were!

2 Replies to “‘Cup of Tea Tales’ – Day Trips and the Opening up of the Yorkshire Countryside.”