My very first memory of a trip to the seaside was before we had got our first car. We were still living in Lawrence Avenue, off Easterley Road and it is the only time we went by train. I can’t remember a lot, but at this point I think I only had one brother. My younger brother was yet to arrive and I remember the journey as it was the days of compartments on trains and a corridor that ran the length of the carriage. I believe we went to Scarborough and it was the first of many visits there.

Scarborough train station was a fair walk from the beach and it was particularly long for young legs, and even more so on the way back as we had a very steep climb back up through the town to the station and none of the excitement. My older brother would know far more about this trip, but I can say that the visits became a regular ritual over our years as children and later with my own children when we lived in England. It became easier when we got our first car. It was one of the first, if not the first, in the street and was started by a starting handle. I can’t remember the model or type, but we knew it as ‘The Fridge’, as it had no form of heating. What it did have was a running board on each side and indicators that flicked out, little orange flags at either side of the front doors. I also seem to remember that the doors opened out the opposite way to all modern cars. (Someone might recognize the car above) Anyway, whatever the type, the car was exciting! Just starting it up was a feat. My Dad would push the steel handle into the front of the engine and then wind the handle. When it started there was danger of the handle kicking back and breaking a wrist. The handle was then stowed in the car and with great noise, considerable smoke and a lot of bravado we would set off. Many were the times we broke down and I don’t think it was long before it was replaced with a Ford Prefect. Both cars were black and would have fitted well into gangster movies. The Prefect didn’t have a nickname, but it did have a heater and my brothers and I were discussing it the other day and we believe the number plate began KTF, but we can’t remember the rest. The Prefect was much more reliable, but that wasn’t saying much, and many a trip was spoilt waiting for the radiator to cool down, so extra water could be added and the journey continued. This was particularly a problem on the way to the East Coast. The Yorkshire Wolds and the climb out of the Vale of York were certainly a test of the car’s stamina.

The video below was released in Jan 2015 and it tells the tale of trips to the seaside.

Another challenge was my older brother’s travel sickness. We usually made it as far as York, but by then he was definitely queasy. My father had a number of lovely qualities, but the ability to be prepared to stop was not one of them. No amount of asking him to find a place to stop ever resulted in him doing so. I remember vividly circling the roundabout outside the castle walls at York, the roundabout full of dancing vivid yellow daffodils, and my brother vomiting out of the window. Goodness only know what onlookers would have been thinking. The cure for travel sickness from my wife’s family was to sit on newspaper and somehow this would prevent it. They are  not from God’s Own Country,  so maybe that explains it. Anyway, if we didn’t go via York then we went by Tadcaster and that was never any better. There were no bypasses in those days, but less traffic, but still jams were the usual, which spoilt day trips.

Sitting in the car there was a range of games we played. There was I Spy, still a firm favourite with grandchildren, The Parson’s Cat and songs such as Ten Green Bottles, Molly Malone, and The Mermaid song: ‘On Friday morn when we set sail on a ship not far from land, I there did espy a pretty, pretty maid with a comb and glass in her hand, her hand, her hand and a comb and a glass in her hand!’ We would all sing at the top of our breaths, much to the annoyance of my father. When we approached the coast we would have a competition and the first to spy the North Sea would sing out, ‘I see the sea, the sea sees me!’ and keep repeating it. 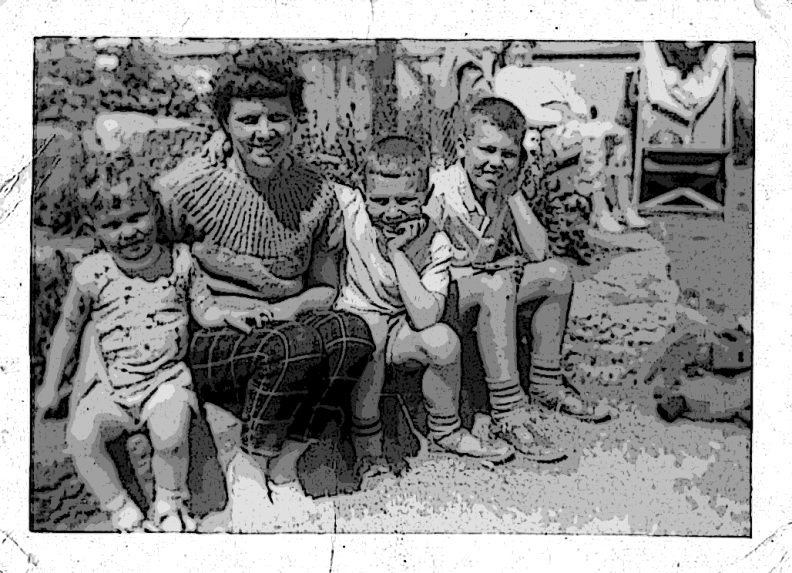 When we finally did arrive at Scarborough, Bridlington or Filey, the ritual was the same. We would find somewhere to park the car and then walk towards the beach. Depending on the weather, we would buy maybe a plastic rain mac, bucket and spade, plastic sandals and maybe some paper flags for the sandcastles. We would then head down to the beach, whether it was raining or not. We would find a suitable place to set up and deck chairs were hired for mum and dad and we would strip down to bathers. If it wasn’t too cold, which wasn’t very often, we would stay there all day, making castles, digging moats, burying one of us or paddling. You never swam in the North Sea whatever the temperature, as the water was far too cold. Your legs and feet would turn blue within seconds and the cold hurt. On the very rare hot, sunny day we would get sunburnt as we had no sunscreen and pink very sore skin would result, followed a day or two later by itchy, peeling agony. Oh, the joys of youth!

If the weather was not good the day would also consist of walking on the front, maybe a donkey ride and at those times, Punch and Judy shows were common. The themes of domestic violence and murder were good entertainment before political correctness stamped it all out. The policeman would eventually catch Punch, ‘That’s the Way to Do It!’ and he would be hanged, only to return as a ghost. We loved it!

By mid afternoon my dad would start to get restless, worried about the traffic, the jams were just the same in reverse, and so we would pack up, traipse back to the car and my brothers and I would usually sleep most of the way home. As there we no seat belts in the cars we could just lie down along the back seat and drift off. Of course my older brother could be preparing for another bout of queasiness on the way home, just to round off a perfect day. One thing about Leeds was its central position and it was possible to get to either coast in about an hour and a half, but it was Scarborough, Filey and Bridlington that were our main ports of call and where we had most of our adventures.