I was trying to remember if we had school excursions at Harehills C.P. and at first I recalled the trip to York and later I recalled Fountain’s Abbey. My York memories are the clearer as I was naughty and bought something I suspected I was not supposed to do. I can only think that one outing a year in the older classes was the norm and probably the Fountain’s Abbey one was in Year 3 and York in Year 4, but I could be wrong and would be interested to hear others’ memories. 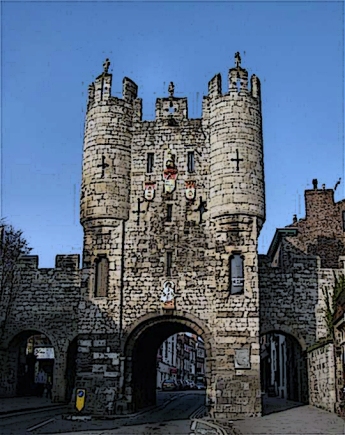 On the trip to York we all were taken by coach. I remember well the smell of the plastic and, being over excited, it didn’t take long for me to feel a little sick. We were all shouted at to sit down, remain in our seats and not to leave a mess. The journey wasn’t long, fortunately and I managed without incident, but I remember the odd child would have to have a bin to be sick in. Either too excited, too many sweets, travel sickness or all of these.  The visit to fabulous York included a walk around Clifford’s Tower, just the outside of course. I used to look up the motte to the keep with  envy as people could be seen on the battlements. As it required an additional fee, we never experienced it and it did have a very dark history. Next was the Castle Museum and this we did venture into. Some parts of the museum were wonderful. I loved the armour and weapons and the visit to Dick Turpin’s cell. The highwayman was executed there I believe. The cell was small and I could only wonder how the man felt in the time he was there. The worst part of the museum was the room after rooms of costumes and uniforms. They seemed to go on for ever. The best part then was the old streets. In the street were shops from Victorian days and you could walk into a sweet shop,  a chemist shop and pub. The shelves and furniture were just as it would have been and the street cobbled, and carts and even an old fire engine were there. The ceiling was black and there was a real feeling of being back in time, which I loved. It made a great impression on me. As we left we went through a mill outside and again the enormous mill stones were a great sight for a young boy. I have been back many times since then and it is still an amazing museum.

After the museum visit we went on a walk on a section of the medieval city walls, then off to the Shambles and a walk though the old shops to the Minster. In those days there was no charge to enter the Minster and the building was a truly magnificent sight. We were allowed to do a little shopping and I remember buying a book on English Castles. It is possible that I still have it somewhere. I think we ate our packed lunch near the river Ouse in the York Museum Gardens and then went on a boat ride past the Bishop’s Palace and Rowntree Park. Having been to York many times since then I can’t remember if we went to the Railway Museum or not. Someone else may have a clearer memory. I do remember going into a gift shop just before we boarded the coach and there several of us spent the last of our money and bought sheath knives. They were poorly made ones with a York crest transferred onto the handle. We had to keep them hidden so as not to attract the attention of the teachers. When I got mine home I was worried my mother would be cross, but she hardly reacted at all and just told me to be careful with it.

Another trip was to Fountains Abbey. This old Cistercian monastery, near Ripon, is a truly beautiful spot. The coach trip was quite long, but we were all relieved to get off and stretch our legs.  I loved the majestic ruins and gardens. It was living history and even at a young age I couldn’t help but wonder about the people who had stood on the same spot a thousand years ago. The size of the buildings was striking and we walked amongst the ruins and learnt about how life would have been. Afterwards we went on a long walk through the Studley Royal water gardens. These lakes and gardens were of less interest to me at this age, than the abbey ruins, but now I appreciate how truly magnificent they are.

I don’t remember any other Harehills C.P. School trips, but again I could be wrong. Another lasting memory from these times was having my hair cut. My mother would regularly give me money and tell me to get my hair cut on the way home after school. On the other side of the road from the school there were a couple of barbers’ shops, I seem to remember and there was a definite atmosphere about them. As you entered you were hit by the smell of Brillcream and aftershave. There were chairs in front of the window where you waited in turn and the linoleum floor had a carpet of hair, that was occasionally swept. If there were men in the shop, the air would have the additional aroma of smoke. Whilst waiting you would look at the magazines and sometimes find some racy pictures to keep you occupied. The shelves were supplied with all sorts of things for sale that I had no idea about. What were Styptic Pencils, condoms and why would I want Wilkinson Sword safety razors? It was all an adult male mystery to me.

I used to watch the barber in action. Hair was combed, raised between two fingers, and trimmed with a sharp pair of scissors. This process was continuous and the fingers were a blur. Somehow in just a few minutes an unruly mop of hair would become a well managed work of art. Water was sprayed from a bottle a, cut-throat razor would appear, sharpened on a leather belt and the back of the neck would be expertly shaved and cleared of unwanted hair. A soft brush appeared and with a few flicks of the wrist any cut hair was removed, a mirror was held up, an approval sought and then the covering protecting the customer was whisked off like a matador at a bull fight, money exchanged and then he would turn around and say, ‘Next?” 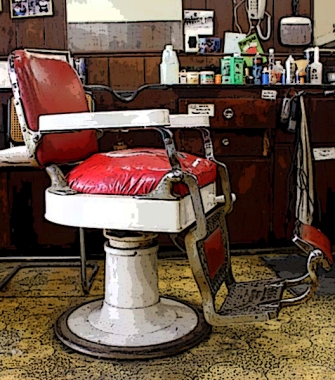 If I was next, then a plank of wood was laid between the two arms of the chair so that the smaller customers were at a height that meant the barber didn’t have to bend. “What will it be?”. To this there didn’t seem a lot of choice, it was usually short back and sides, or short back and sides with a square neck. I did once try a crew cut, but with my fine hair it wouldn’t stand up like my older brother’s. Anyway the magic of the comb and scissors was utilized and then the clippers came out. I believe it had the subtlety of a New South Wales sheep shearer, but within a few moments a mirror was held up for approval. I have no idea what would have happened if I had said I wasn’t happy with something and I wasn’t game to find out. He would ask if you wanted lacquer and if you said yes, you were sprayed with some highly scented liquid that set with a crusty finish to your hair. Out came the brush, two swift flicks or so and then the apron was unfastened, additional swishes to ensure some hair went down the back of the neck to itch for an eternity and then a hand was stretched out to receive payment.

I would leave the shop a squirming mess, but look in the shop window reflection to see what sort of fashion statement I made. My mother would check to see that I have been shorn as I entered through our door and nod her approval, whilst I would still be unable to stop gyrating and removed my shirt, and shook it vigorously to remove any remnants of the hair. Now I would be grateful to have that hair back, but such is the experience of youth that we don’t appreciate what we have until it has gone.

The video Trouble accompanies one of my new songs. It is an enigmatic song and video that you might enjoy. The drone footage of Western Australia was shot by one of my boys Stuart Cameron. If you enjoy it that is fine, but there is no obligation to watch it. If you think you know what it is about then I would be delighted to hear your suggestions.