Harry would sit in the parlour, when we were there, probably to be out of the way, and it allowed him to read the newspaper and smoke his pipe. Pipe smoking fascinated me. I loved the smell of his pipe tobacco and pipe smoking was a ritual that I watched with fascination. Pipes had to be dismantled and pipe cleaners used to remove the tar residue and there was a tool that was used to bore out the bulb of the pipe and to keep it clean. The bowl, on one, also screwed off the stem and again there was a collection of tar in the metal bowl that needed to be cleaned. My grandfather had a rack with a wide assortment of pipes and there seemed to be an art in cleaning, packing, lighting and keeping the tobacco burning. I can still smell it and see him sitting in his chair, contentedly puffing on his pipe. Of course, these were the days when the dangers of smoking were not so well known.

Grandma was the one who looked after me and my two brothers. We were not always

there en masse, but one of the highlights was her cooking. Now, looking back, I am not sure if it was because she doubted my mother’s culinary skills, or whether she just loved seeing us eat, but her cooking was close to being able to feed the five thousand. Let me run you through the usual menu. We would start off with a tin of Heinz tomato soup, followed by traditional Yorkshire pudding. This was cooked in a large tray maybe fourteen inches by ten. I think she may have cooked two trays if the three of us were there. The pudding would be cut in half, so it was a large portion. I had gravy on mine, but my older brother had Golden Syrup on his. These two courses were starters and then we had a roast beef and roast potato and vegetable dinner. Again, she was not mean with her portions and to follow all this we had either the fabled blueberry and cream pie or more often Ambrosia tinned creamed rice pudding. My elder brother used to have a dollop of jam in the middle, but I never liked that. Afterwards we used to just have to lie about  pogged for a while. You would imagine after a regular feed like this, that we would have been quite large, but not one of us has ever had a real problem with weight. I can still taste and feel the effects as I write this now.

Now there was one occasion where my elder brother, my grandma and I went to the local shops at Chapel Allerton and she bought a paper bag of Victoria plums. These were quite a thrill as they were quite expensive and only had a short season. We went back to the park and sat on a bench near the bowling green. It was the morning on a warm summer day and the bowling green was deserted. The grass was a lush dark green and the crown was immaculately kept. My grandmother handed out the plums and we tucked in. The plums were juicy and I was well into mine when grandma suddenly stopped and with her expert eye examined the plum she had. She snatched my brother’s off him and checked that and then took mine. I looked before I handed it over and there were white maggoty things inside and, what was worse, I had clearly eaten some. She laughed, put the remains back in the bag and I believe we headed off to the ice cream van as compensation. I suspect she never told my mother what had happened, but I was always careful to check in future.

Grandma was fairly ingenious in occupying three small, active boys and she would often set us the task of cutting her grass. Now, as mentioned in a previous account, the lawn was tiny, probably about four square metres, nine square yards. She did have a small hand powered lawn cutter, but only my elder brother was allowed to use that and often it was almost impossible to use. She had a hierarchy of cutting utensils. A pair of shears for the eldest, large scissors for me and tiny scissors for my younger brother. After struggling cutting for a while, blisters would appear and the process became far from pleasant. The three of us toiled away until the job was done and then we would reap some reward. At least we gave her some peace and quiet for a while.

One of the highlights of the year was bonfire night. November the fifth, used to be a major event at the time and every year we would be taken by my grandma to the post office on Chapeltown Road to buy a box of Standard Fireworks and a rocket. Anyone could buy fireworks in those days and health and safety hadn’t really been invented. They were fantastic. They smelt of gunpowder and magic and we all had a box. We used to take them home, carrying them as if they might explode at any time, which was probably the case. 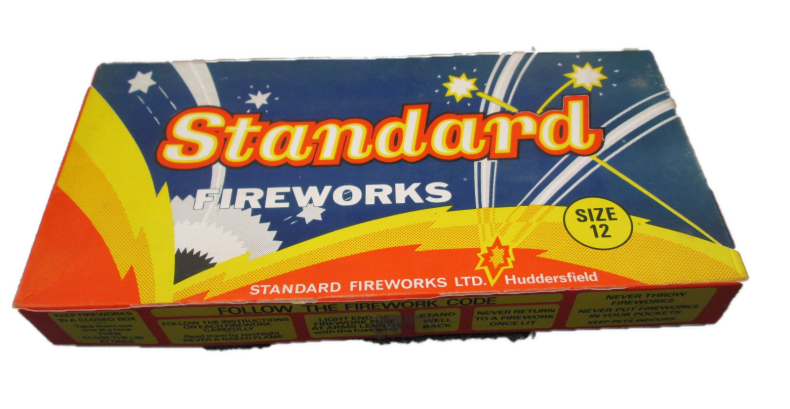 The night would approach and when we were young, the letting off of the fireworks took place at home in the back garden. A small fire was built and lit, potatoes were placed in it to cook and we would stand around burning hot on one side and freezing cold on the other. My father would set up milk bottles for the rockets, nail the Catherine Wheels to the fence and generally take charge. It was usually bitterly cold and frosty, and we gathered around as my dad lit the blue touch paper as instructed and stood well back. There was a moment when you felt it hadn’t worked, followed by a whoosh or a roar. There was the excitement of the Roman Candles, the Spitfire, the Jack in the Box that always seemed to follow you around and, my favourite, Mt. Vesuvius. We were allowed to hold the sparklers and we drew pictures in the night sky and they had a distinctive smell. Usually the whole evening was over in a very short time and we would stay watching the fire burn down, before pulling out the potatoes and eating dirty jacket potatoes with melted butter. What joy! Sometimes we had gingerbread pigs or men.

These were simple times, but happy ones. Of course there would be the odd falling out, but my grandmother never seemed to lose her temper with us. She taught us to play cards and I can still remember hours of playing pump the well dry and snap and I know I used to get upset if I thought she was letting my younger brother win. The competitive streak has always been part of sibling rivalry, but I loved the time we all spent together.